On October 18th, during the R&D Day (or Analyst Day) event held in New York, Biomarin released the 30 month follow up data from the ten children enrolled in the third cohort of the phase 2 study with vosoritide. This is the group using 15mcg/kg dose of the investigational drug. It[s good to have fresh information, but before we start reviewing the updated results, let's think a bit about what was not published.

You might remember that, by the end of the phase 2 study last year, all children in the lower doses' cohorts started receiving 15 mcg/kg. Children in the 30 mcg/kg cohort were kept using this dose, although no significant increased benefit over 15mcg/kg was seen at that time, according with what was published by the developer then (check it out here).

Unfortunately, apart from some safety data, Biomarin did not release any new efficacy data from the other three cohorts (2.5 mcg/kg, 7.5 mcg/kg and 30 mcg/kg). It would have been good to learn more about how the kids in the first two cohorts have been responding to the increased dose over time (one year!), as well as understanding whether the higher dose (30 mcg/kg) might have produced any increased benefit in longer term compared to the 15 mcg/kg dose, the one chosen to be used in the phase 3 study. As we will see below, it seems that the changes in growth patterns are slow, so it is possible that one year would not be sufficient to point out to additional benefits in those other three cohorts, and perhaps this could be a reason why data from them were not released.

Now, let's get started. We will walk through the relevant published slides of the R&D Day presentation (pages 60 to 75) and will try to understand the data presented during their event. All figures from this article come from the published presentation. I recommend you to also listen to the recorded audio of the presentation for more details on the following topics (the vosoritide segment starts at ~2:00:00).

Growth velocity is the main efficacy endpoint used in the vosoritide studies (check them out in ClinicalTrials.gov). In Figure 1 we see that the average growth velocity (AGV) of the enrolled children was 4cm/year before starting using vosoritide. After starting the intervention there has been a sustained increase in growth velocity over 30 months (blue table). We note that there was a slight decrease in the AVG after one year but it remained constant afterwards, although there are only two additional data points (this is a natural limitation of long term studies, nothing to be surprised about). The accumulated effect, as depicted in the figure, is of about additional 4cm on top of what would be expected for those kids without any intervention. In an exercise just to help the reader to understand the meaning of these results, if the treated children were growing without any intervention, during the 30 month period they would have grown in average about 10 cm, assuming constant growth velocity as seen in baseline, but with vosoritide they grew 4 cm more on top of those 10 cm. 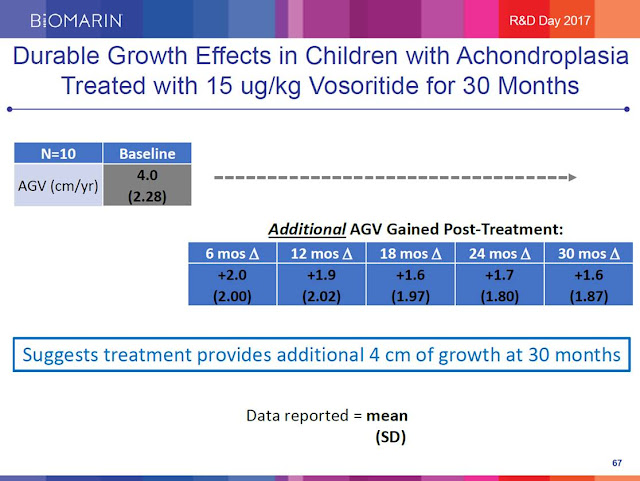 Growth patterns varies broadly in the average population. This is why we have charts like the one we see in Figure 2, with several curves representing several different growth patterns shown by the population studied to generate that chart. Each curve represents a percent of the population from which the measurements were taken. The mid line, which in the Z-score table is "zero" represents the growth pattern seen in 50% of the population (mean). Each curve above and below represents a "standard deviation" of the mean and can be represented as scores (in this case, Z-scores) so, for instance, about 15.9% of the kids in the population which gave the values used in the chart have Z-scores +1 or -1 and would follow the respective curves above or below the mean, while only 2.28% would be in the Z-score +2 or -2 and would have a much higher or lower growth pattern, respectively, compared to the mean. Z-Scores help researchers and scientists to easily quantify how much a given individual in a determined group deviate from the mean (for instance, this helps in the diagnosis of several diseases such as osteoporosis). You can learn more about Z-Scores here, and about normal growth curves here (1).

In Figure 2, we also see the calculated Z-scores for achondroplasia (-4/-5, meaning 4 to 5 negative standard deviations from the mean). For achondroplasia, given the important growth restriction, if they were plotted in the same chart used for the average population, the line representing their growth would fall far below the mean. That's one reason why we use separate growth charts specific for achondroplasia (2-5).

Figure 3 shows the actual Z-score trends in the treated group at 30 months. There is a gradual improvement of the mean Z-Score of the participants of the study. What this chart tells us is that they are now closer to the lowest normal Z-Score of the normal growth chart compared to their baseline indexes, although the relative distance is still very long, implying that the effect of vosoritide seems to be slow and gradual.

Furthermore, if projected to a 10 year therapy, the treated group would have added about 3.6 Z-scores, which would be sufficient to place them within the lower range of the normal growth curves. However, according to the Biomarin´s speaker, to achieve this kind of outcomes, the therapy should start earlier. 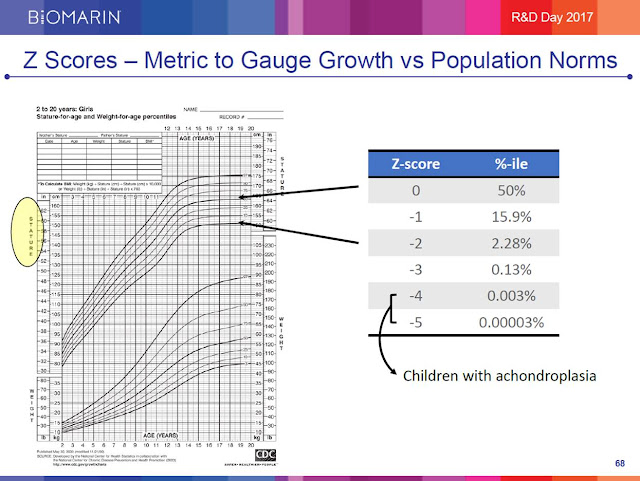 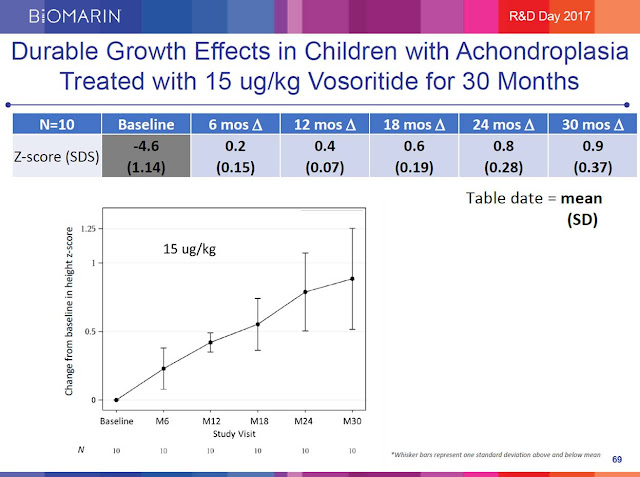 Achondroplasia is defined as a form of skeletal dysplasia characterized by  disproportionate short stature, in which the limbs of the individual are short compared to the trunk. The disproportion happens because the long bones are more affected by the mutation in the fibroblast growth factor receptor 3 (FGFR3) than the spine and other flat bones.

It is an expectation of an intervention for achondroplasia that if it could counteract the growth arrest caused by the mutant receptor then the long bones would grow more, thus reducing the limb disproportion. Therefore, it has been expected that vosoritide could be able to reduce the typical body disproportion. In figure 4 we see that there is a mild but constant reduction in the disproportionality as measured as a ratio of upper body/lower body (U/L ratio) (1). Although mild, again here the speaker highlighted the potential for better outcomes if the therapy could start earlier.

Figure 4. Effect of vosoritide in the body disproportionality (p.70). 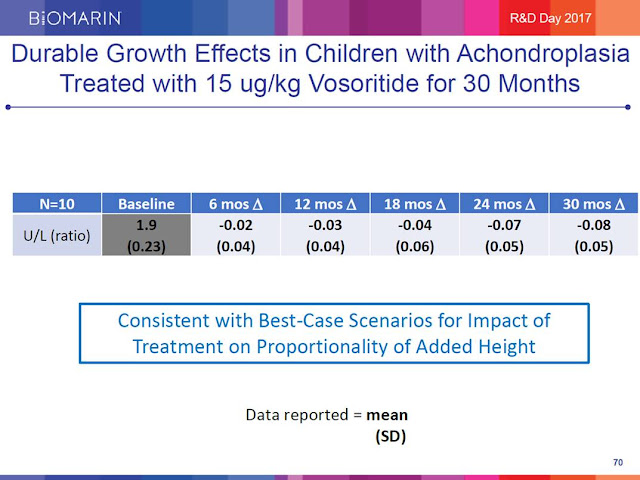 One relevant concern about chronic therapies is the risk that the treatment could lose effect when used in long term, a phenomenon called tachyphylaxis. There are many examples of drugs losing their effects due to tachyphylaxis (for example, some short-action bronchodilators used in asthma may lose effect if overused or abused).
Pharmacodynamics is the technique which studies how the body reacts to a given therapy. The pharmacodynamic tests shown in Figure 5 demonstrates that one of the chemical effects of vosoritide remains intact after 30 months, so it seems to not induce thachyphylaxis. 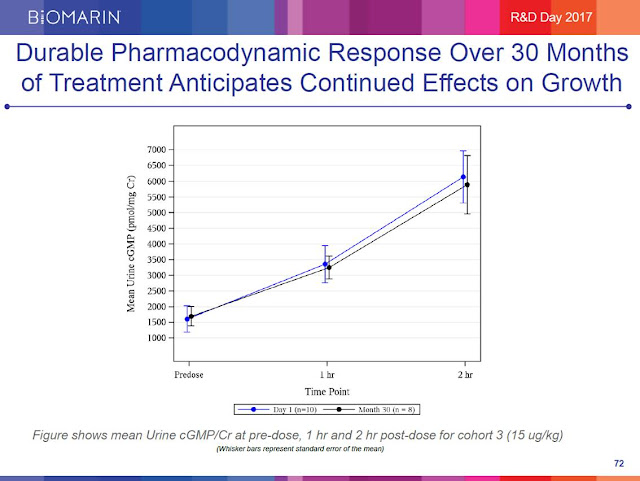 Another main question to answer during the development of a new therapy is if it safe. Figure 6 shows a summary of the safety profile of vosoritide, which seems to has been well tolerated across all doses, with few adverse events, most of them reported as local site injection reactions. Vosoritide is an analogue of the C-type natriuretic peptide (CNP). CNP is a natural peptide with known hemodynamic effects (it can cause hypotension or decrease in the blood pressure), and the same is seen with vosoritide. Reviewing the presentation it seems that safety was the only aspect that included information from all cohorts. 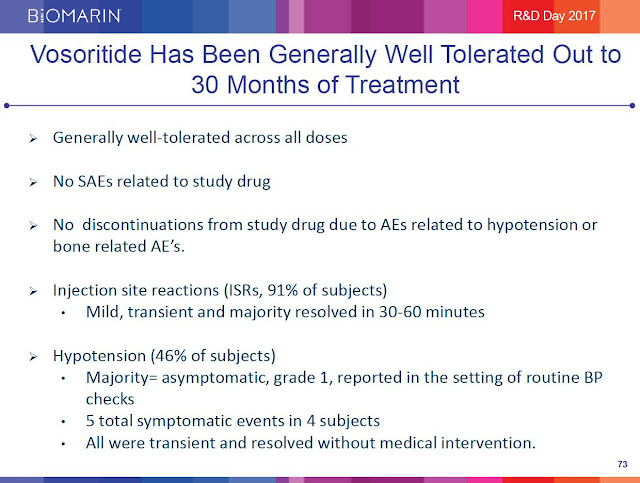 Efficacy results and the future of vosoritide clinical development

With the positive results obtained Biomarin says it is already working on the design and details of a study in a younger population (infants/toddlers) as we see in Figure 7 (slide 71). The rationale is: the earlier the intervention, the better would be the outcomes. 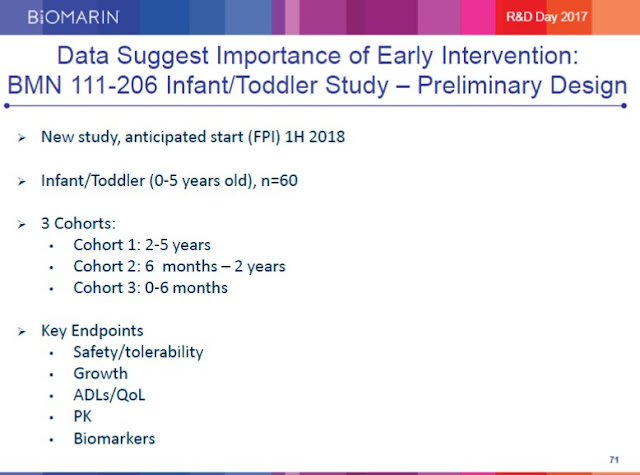 On October 25th, Biomarin released their third quarter financial report and provided additional information about the clinical development of vosoritide. More specifically, they estimate that they will have the key clinical data from the ongoing phase 3 study by the end of 2019. This allows us to estimate that, if approved by the regulators, vosoritide would reach the market during 2020.

This blog has several articles reviewing CNP, vosoritide and many other potential therapeutic strategies to treat achondroplasia. You just need to click on the Index button on top of this page to find them. 😊

“Be the change that you wish to see in the world.”
Gandhi

This is a Portuguese - English - Spanish blog directed to divulge the current knowledge and the basic and clinical research towards pharmacological therapies for achondroplasia.

This is a shorter link for this blog.

Publicações do Autor - Papers by the Author

Morrys Kaisermann, physician interested in the study of the FGFR3 related chondrodysplasias and specially in the most common presentation, ACHONDROPLASIA.